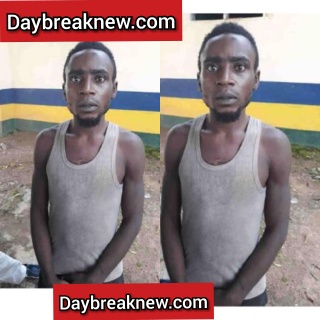 Man rapes his mom, 65, mother-in-law, 70
.
.
A 32-year-old man who had been raping women in Kaduna State, including his own mother, has, at last been, arrested by the Inspector-General of Police (IGP) Special Squad.
.
.
Shekari David, who allegedly raped his mother and mother-in -law, has blamed his action on alcohol. .
.
Currently detained at the Katari Police Division in Kaduna State, the suspect confessed that he had, on two occasions raped his own mother aged 65, and his mother in-law 70 in the dead of the night, while they were sleeping. .
.
He said his behaviour made his wife to abandon him for another man. David said: “I am a farmer and I was once married, but my wife abandoned me due to my penchant for raping old women. .
.
I don’t know if I am under a spell but whenever I am drunk, a spirit comes into me and I will be going around town looking for women to rape. ‘I have been beaten up over this issue severally, yet, I can’t still control myself whenever I get drunk. .
.
I raped my mother during our last Moroha Festival, when I got drunk. I couldn’t find any old woman to rape and when I got home, I found my mother sleeping and I penetrated and raped her.
.
.
My mother screamed when she saw me on top of her and our neighbours gathered. Everyone saw that I was drunk and when I became sober I begged her to forgive me and she accepted. .
.
Not long after that, I attended another festival in my wife’s community known as Mahuta and I became drunk again; in the dead of the night I went to my ex-wife mother’s house and found her sleeping and I raped her. .
.
When the woman woke up and saw me on top of her, she shouted and people came around, and caught me. I was given the beating of my life before I was asked to go. .
.
I don’t know what usually comes over me when I am drunk. That spirit is what normally pushes me to rape old women.”