Design a site like this with WordPress.com
Get started
Skip to content
Date: September 13, 2018Author: daybreaknewonline 0 Comments

The company’s shares fall after an accident in which Apple published details of its new products online ahead of the launch.

Apple has unveiled three new models of iPhones to a negative reaction from the stock market, and hours after accidentally leaking them online itself.

The updated model of the flagship iPhone X has been named the iPhone XS and will retail for the same price of $999 – but a budget and a luxury version of the smartphone were announced too.

The UK price is expected to be in line with the dollar price as Apple has typically retailed its phones for the exact same amount in sterling as it has in dollars.

Replacing the iPhone 8, the iPhone XR will be available for $749, while the basic rate iPhone XS Max will set consumers back $1099.

Apple became the first trillion-dollar company in history, propelled in its fortunes since the launch of the iPhone in 2007 – but after 11 years of growth, global demand for new smartphones is plateauing.

Image: Apple has launched three new iPhones in a subdued event in California

Image: The UK price for iPhones is set to be in line with the dollar price

Market analysts believe that Apple is going to chase continued growth by getting its customers to pay for ever-more expensive phones.

“There’s no real game changer on the table,” Hal Eddins, the chief economist at Apple shareholder Capital Investment Counsel, told Reuters. “It’s a matter of getting people to keep moving up.”

Certainly the prices of its recent phone releases suggest a rapid rise in the cost of Apple devices: 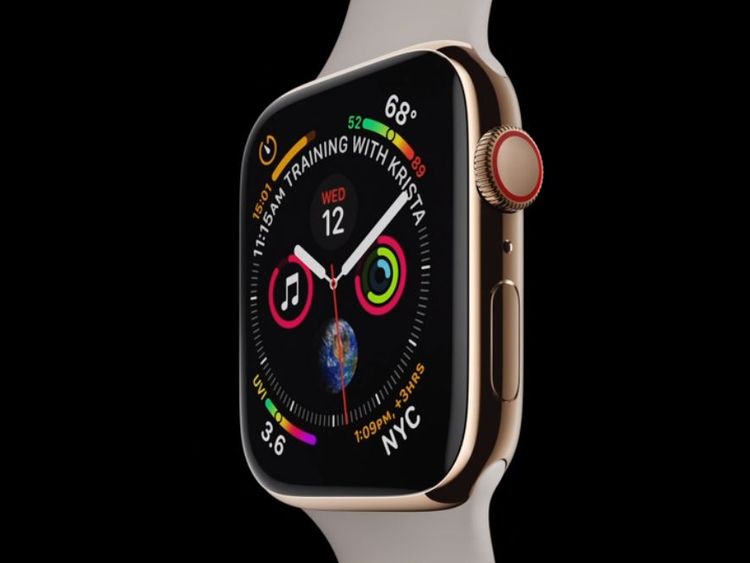 Regardless of the phones, the real star of Apple’s launch event on Wednesday evening was the Apple Watch Series 4, which, despite being a relative squib on its release, has begun to corner the market as a health wearable.

To this end, Apple announced that it had received approval from the US medical regulator, the Food and Drug Administration, to provide electrocardiograms, also known as ECGs, through their watches.

Jeff Williams, Apple’s chief operating officer, says it is the first FDA approval of its kind. The features will be available to customers later on during the year, and Apple hopes they will be available globally.

Sky’s technology correspondent Rowland Manthorpe described it as Apple, little by little, coming to control the entirety of the human body.

Despite the upgrade to the previous generation of Apple’s iPhone X range, the market reaction to the announcement was at best subdued – Apple’s shares were down at -1.31% in trading immediately after the event.

Back when Steve Jobs was Apple’s chief executive, his keynotes often concluded with him walking off stage before turning back and beginning “One more thing…” before announcing a new product line or business experiment.

In 1998, Mr Jobs announced that the company had become profitable again during his keynote. The company’s shares rocketed to just under $1.50 each by the end of that year.

Two decades later, Apple shares are worth over $220 each (an increase of over 14,000%) but the Apple Watch announcement doesn’t quite seem like the “one more thing…” needed to see that success replicated over the next 20 years.

Today we learned that the next Apple Watch will be able to detect falls and track the heart’s rhythm and electrical activity with sensors built into the back and crown.

Heart disease is a giant killer. Real time electrocardiogram data could genuinely help the millions of sufferers of irregular, rapid or slow heartbeats, especially when it’s allied to AI interpretation.

Of course, it’s all very well to track people – as we’ve learnt this year, that promise is only as good as the protections on the data. And here we are starting to see something we’ve been waiting a long time for: the competitive advantage of privacy.

Who are you going to trust with your heart data? Google, with its giant advertising network? Or Apple, which boasts its belief that “privacy is a human right” (as long as you can afford its products)?

Apple’s events are pompous, neurotically controlled celebrations of capitalist extraction, but it’s hard to deny their importance. Once again, many millions will feel their impact.