Design a site like this with WordPress.com
Get started
Skip to content
Date: September 28, 2018Author: daybreaknewonline 0 Comments

THE world’s first flying car will go on sale next month and it can transform into a plane in under one minute and has 400 miles of range.

The world’s first flying car the Terrafugia Transition will go on sale in October (Image: TERRAFUGIA)

Next month the world’s first flying car will go on sale across the world.

Pre-sales are scheduled to begin next month of the Terrafugia Transition flying car.

It is a two-seater hybrid-electric vehicle which will be able to switch between driving and flying modes in less than a minute.

Deliveries of the new flying car will begin in early 2019.

The Terrafugia Transition will be able to fly up to 400 miles at speeds of up to 100mph.

Prices for the new model have yet to be confirmed but China news agency Xinhua states that initial sales will begin in October.

Terrafugia, which is owned by parent company Volvo, have recently made some improvements to the car.

In addition this it has been given rear-view cameras and a new parachute system.

Terrafugia has also fitted a ‘boost’ mode which will give a ‘brief burst of extra power while flying.’

The vehicle has been certified as a Light Sport Aircraft by the Federal Aviation Administration in 2016 and also meets National Highway and Traffic Safety Administration standards.

Customers will, however, need to hold both a driving licence and a pilot’s license to be able to operate the vehicle.

The Transition will be able to fly at a maximum altitude of 10,000 feet and utilises fold out wings to be able to travel in the air.

The company’s CEO Chris Jaran said earlier this year: “Developing this new technology has allowed us to test several different mechanisms and generate process improvements along the way.

“We are at the critical point where we can implement the best design features based on years of flight and drive testing. 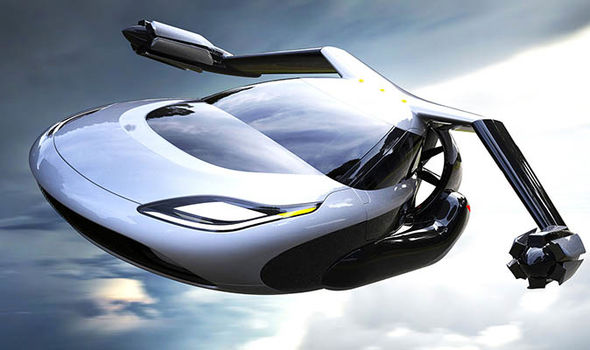 “This will improve function, safety, and aesthetics for the optimal flying and driving experience.”

The company is also developing the TF-X which is a four-seater variant which will be computer controlled.

“The TF-X won’t require an airport for takeoff and landing, and it will drive on all roads and highways – providing the convenience of true door-to-door transportation,” the company said.